The Missionary Society of the sacred Heart of Jesus was founded in Madrid, Spain, on 11th May, 1942. This came about when the Church recognized it as pious Union and approved its first statutes.

The first foundational movement dates back to the year 1938. It began with Elena Ramos, a young woman who had a clear, exclusively missionary vocation. She looked out for an institute that had the spirit and rules of St. Ignatius, and that would assure her of the realization of her vocation in the Missions. On not finding such an institute, she decided to found one herself. In a short time, other young persons who shared the same missionary ideas joined h

On 20th February, 1942, Pilar Navarro Garrido joined the group. She was born in Casas de Benítez (Cuenca), on 14th December, 1908. When the first group gave up the recently opened Institute in 1944, she was appointed Directress of the Institute by His Excellency, Dr. Leopoldo Eijoy Garay, Bishop of Madrid-Alcalá. From that date onwards, all the Sisters, who continued ahead, considered her as the real foundress.

In 1943 María Isabel Alonso Álvarez entered the Institute. She was the “right hand” and “firm support” of Mother Pilar Navarro, and the group considered “both as one

Fr. Ángel Ayala Alarcón assumed the role of spiritual director of the group from the beginning. He was requested to do so by the Bishop of the Diocese of Madrid-Alcalá, Dr. Leopoldo Eijoy Garay.

On 5th May, 1954, the Missionary Society of the Sacred Heart of Jesus received de Decree of Erection as a religious Congregation of Diocesan Right. This Decree confirmed Mother Pilar Navarro as FOUNDRESS because of “her remarkable dedication to the work and her tireless, watchful care over 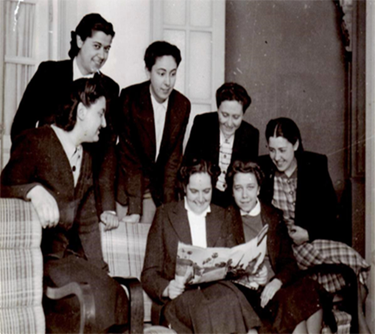 Pilar Navarro to the right